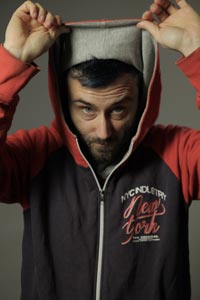 Sergio Basso has lived in China on several occasions, since 1996. In China he was assistant director and dialogue writer for Gianni Amelio on the set of the film The Missing Star.

He graduated in Film Direction from the Centro Sperimentale di Cinematografia in Rome. He has a three-year diploma in directing and acting with Jurij Alschitz, under the aegis of Gitis, Academy of Dramatic Art in Moscow.

“Elementary Loves” is his first feature film, released in 2014 in Italy, Russia, Switzerland, and Canada, simultaneously with the novel published by Salani.

Previously, he had filmed many documentaries, awarded in several international festivals: Locarno, Annecy, Nyon, Beijing, Turin, Moscow, Rio de Janeiro, Toronto, e.g. he won the first prize at 2010 Annecy International Animation Film Festival and the Award for Best Film at the International Sports Festival in 2013 (with “19 and 72”, of Pietro Mennea) and in 2015 (with “Elementary Loves”).

He collaborated, among others, with the UN, NOKIA, SONY, Fuji, Il Corriere della Sera, Italy TELECOM, Save the Children, the publisher IlSole24ore, SKIRA, the Institute of Cultural Heritage of Emilia Romagna, the University of Studies of Milan, the University of Oxford, the MAXXI Museum in Rome, the Scuola Holden in Turin.

He is a member of the European Documentary Network. He has received the Movin’up 2008 scholarship for Young Italian Artists. He is among the winners of the Solinas Prize – Documentary Film for 2009.

At the Centro Sperimentale di Cinematografia he taught courses in filming art-history documentaries and held several workshops in documentary filmmaking abroad, i.e. at the FAMU, Prague, and University of Auckland, New Zealand.

Since 2001 he has been artistic director of the Theatre Company Teatraz.
In theater he worked, among others, with Pyotr Fomenko, Eimuntas Nekrošius and Philippe Delaigue.

More recently he has dedicated himself to the development of cross-platform cross-media with Il Corriere della Sera and experimentation in animation.
His work often deals with the interaction between Chinese and European cultures.

In 2014 he was hired to film a documentary in China for the prime-time on the Chinese state television, CCTV 6, dedicated to the revival of the Han Dynasty in the early A.D.

The invitation was renewed in 2016: he turned to BeijingTV the documentary for the eightieth of the Long March, which won the 2016 China Award.

He translated Beijing playwright Guo Shixing’ Cesuo and he is staging its performance in the Italian theatres with his theatre company.